The third meeting of clergy of New York City Deanery

On January 16 of 2015, the Dean of New York City, Archpriest Alexander Belya, led the meeting of clergy of New York Deanery in the building of The Synod of Bishops, 93rd St., Manhattan.

This Deanery consists of five boroughs of New York and some neighborhoods; a majority of parishes were represented by their clergy.

The First Hierarch of Russian Orthodox Church Outside of Russian, Metropolitan Hilarion, and Bishop Nicolas of Manhattan took a part in the meeting of Deanery as well.

The agenda consisted of discussing of some events of life of the Deanery and Church, and some administrative questions.

Metropolitan Hilarion and Archpriest Alexander Belya led the discussion. A valuable part of the meeting was a lecture of Hieromonk Photius together with discussion about connections between the feasts of Christmas and Epiphany, their common theological and historical roots, and rich liturgical traditions.

At the end of the meeting, clergy and hierarchs expressed their gratitude to fr. Photius for wonderful lecture, for spiritual, educational and enriching discussion, and to fr. Alexander because thanks to him these discussion and forum became possible.

Priests of the Deanery emphasized the importance of such meetings for the future, and Bishop Nicolas also recommended some materials for publishing. The participants expressed their desire to organize similar event soon. 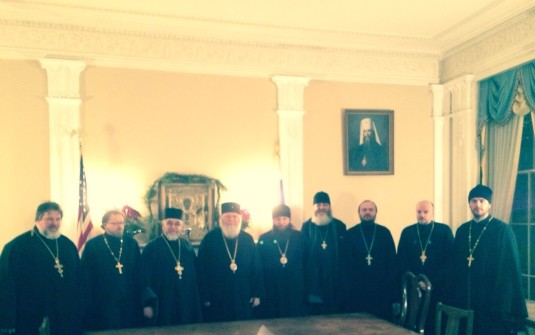